The coppice system and coppicing

used to be an utterly common way of using forests in the lowland areas of Bohemia and Moravia. As time passed, systematically cleared parts of forests were gradually used to obtain firewood, small-scale building material or material for the production of charcoal or baskets. This management method created a spatial and temporal mosaic in the landscape, thus contributing secondarily to maintaining the character of open forests.

In its natural form, open forest itself has its origins in the Mesozoic. This unique habitat was originally formed by large herbivores predominantly, but also by various disturbance processes, such as forest fires, which prevented the creation of a continuous tree stand.

At present, two basic coppicing methods can be described. In forestry terminology, these methods are referred to as coppice forest and coppice-with-standards.

The coppice forest management means an area-based periodic felling of selected stands. Subsequently, there is a natural regeneration of the left stumps through sprouts. The cleared vegetation is therefore regenerated vegetatively. The coppice-with-standards is a combination of a coppice forest and high forest (mostly an even-aged stand composed of woody species regenerated generatively, i.e. from seeds or seedlings). In the coppice-with-standards, promising individuals, so-called standards, are selected intentionally. These standards are then left in situ and the surrounding vegetation is felled.

Therefore, while the stumps left after felling are a source of vegetative regeneration, the standards are a source of natural generative regeneration. Pruning is repeated periodically at various time intervals, approximately 7 to 40 years, depending on the tree species and the purpose of its use. However, the Forest Act provides for the shortest possible rotation period (i.e. the age of the stand at which its regeneration begins) in commercial forests at 80 years. This is one of the main reasons why none of the above-mentioned coppicing management methods is applied in the common commercial forest management practice. 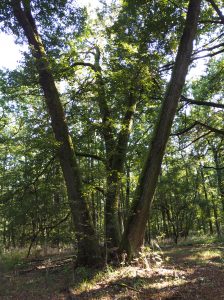 A polycormon – a typical feature of a former coppice in the Hodonínská doubrava SCI (2020). Photo by Tereza Kočárková

The trees of the coppice system take the form of polycormons, i.e. trunks growing from a single stump.

Many deciduous trees have the ability to produce sprouts. For example, hornbeam, linden or oak can produce them for hundreds of years. They can be pruned in several cycles. Hazelnuts and field maples were also pruned for coppicing purposes in the past. In addition to fuel, ash and elm leaves were also used as winter fodder for cattle.

According to Radim Hédl and Péter Szabó (article in magazine Vesmír, in Czech), “coppice is a dynamic mosaic” where the environment changes between two fellings and this habitat becomes suitable for different organisms over time. First, the early clear-cut stage with relatively sparse vegetation of short-lived nitrophytes, Juncus and grasses offers space for light-loving animals, especially insects. Because the area is usually fenced, it begins to thicken in the second year, so cane-type grasses and stump sprouts grow here, creating a hard-to-penetrate thicket and thus an environment for birds tied to shrubs.

Subsequent higher sprouts create shadows in the undergrowth, which are used by forest species. Saprotrophic organisms (which take advantage of biomass decomposition), such as fungi and some bird species, get their chance just before felling, when it is very dark near the ground and there is enough dead biomass.

The positive effect of the coppice system

Current scientific and practical knowledge shows that coppicing as a way to restore open forests can have a positive effect on a number of endangered heliophilous and thermophilic forest plant and animal species. Thanks to coppicing, open stands are created; this is a suitable environment for these organisms and, during the growth of sprouts after pruning the trees, also for other species. The stands can become home to a number of saproxylic organisms tied to old trees (e.g. stag beetle or great capricorn beetle) and offer shelter for small vertebrates and some bird species.

Coppice forests were on the decrease in the Czech Republic from the second half of the 18th century. Today, they are returning very slowly. A successful return is being observed e.g. in the Podyjí National Park. The Pálava Protected Landscape Area Administration takes care of it within the Nature Conservation Agency of the Czech Republic. The general principles of management concerning protected areas and selected target features are considered in both cases.

From the point of view of nature conservation, the return to this type of management proves to be very effective and even the only one that currently ensures survival of many species. Although it cannot be assumed that this forest management method will be widely introduced in the Czech Republic, the One Nature project wants to prove (based on scientific experiments in the SCIs Hodonínská Doubrava and Karlštejn-Koda) the significant and positive impact it may have on selected protected species.