Natura 2000 is the largest network of protected areas in the world, which all member states of the European Union designate in their territories according to horizontal principles. It helps to protect and preserve rare and endangered wild animal and plant species and habitats for future generations. These parts of nature, which form target features of the Natura 2000 network areas, may therefore be somewhat different from those for which national parks, protected landscape areas or small-size specially protected areas are designed in the Czech Republic.

The reason is because the scarcity, threats and importance of such protected species and habitats are assessed across whole Europe – and that is why joint and equivalent efforts across the EU are needed to protect them effectively. However, this does not mean that the “Czech” specially protected areas and the “European” Natura 2000 network are completely different in terms of their focus. In many cases, they overlap, have common goals and coexist as effective tools for territorial conservation of biodiversity, both in the Czech Republic and in Europe.

The Natura 2000 network was established on the basis of:

Directive 2009/147/EC of 2 April 1979 on the conservation of wild birds, as amended (known as “Birds Directive”), on the basis of which 41 Special Protection Areas (SPAs) are designated in the Czech Republic.

Council Directive 92/43/EEC of 21 May 1992 on the conservation of natural habitats and of wild fauna and flora, as amended (known as “Habitats Directive”), on the basis of which 1,113 Sites of Community Importance (SCIs) are designated.
In the Czech Republic, the Natura 2000 network is implemented through designation of Special Protection Areas and Sites of Community Importance which often overlap with the national specially protected areas, such as national parks or protected landscape areas.

The Nature Conservation Agency (NCA) manages the Nature Conservancy Central Register. It also includes links to separate map websites of Special Protection Areas (in Czech) and Sites of Community Importance (in Czech) with detailed information about individual sites. Below, there are maps of the Czech Republic. The first map shows all sites, the second one shows the sites administered by the NCA which are the target localities of the One Nature project. 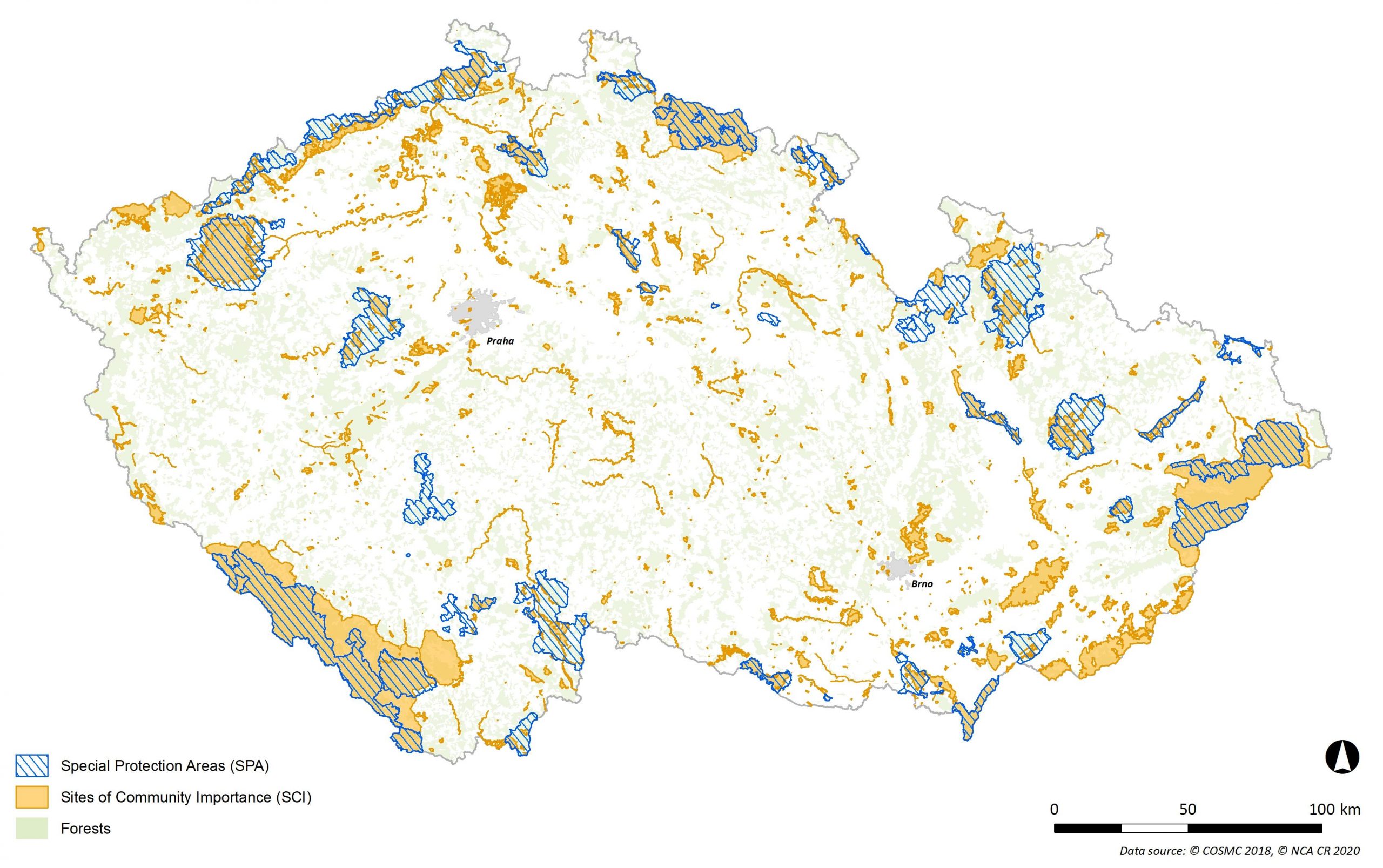 Natura 2000 sitess in the Czech Republic 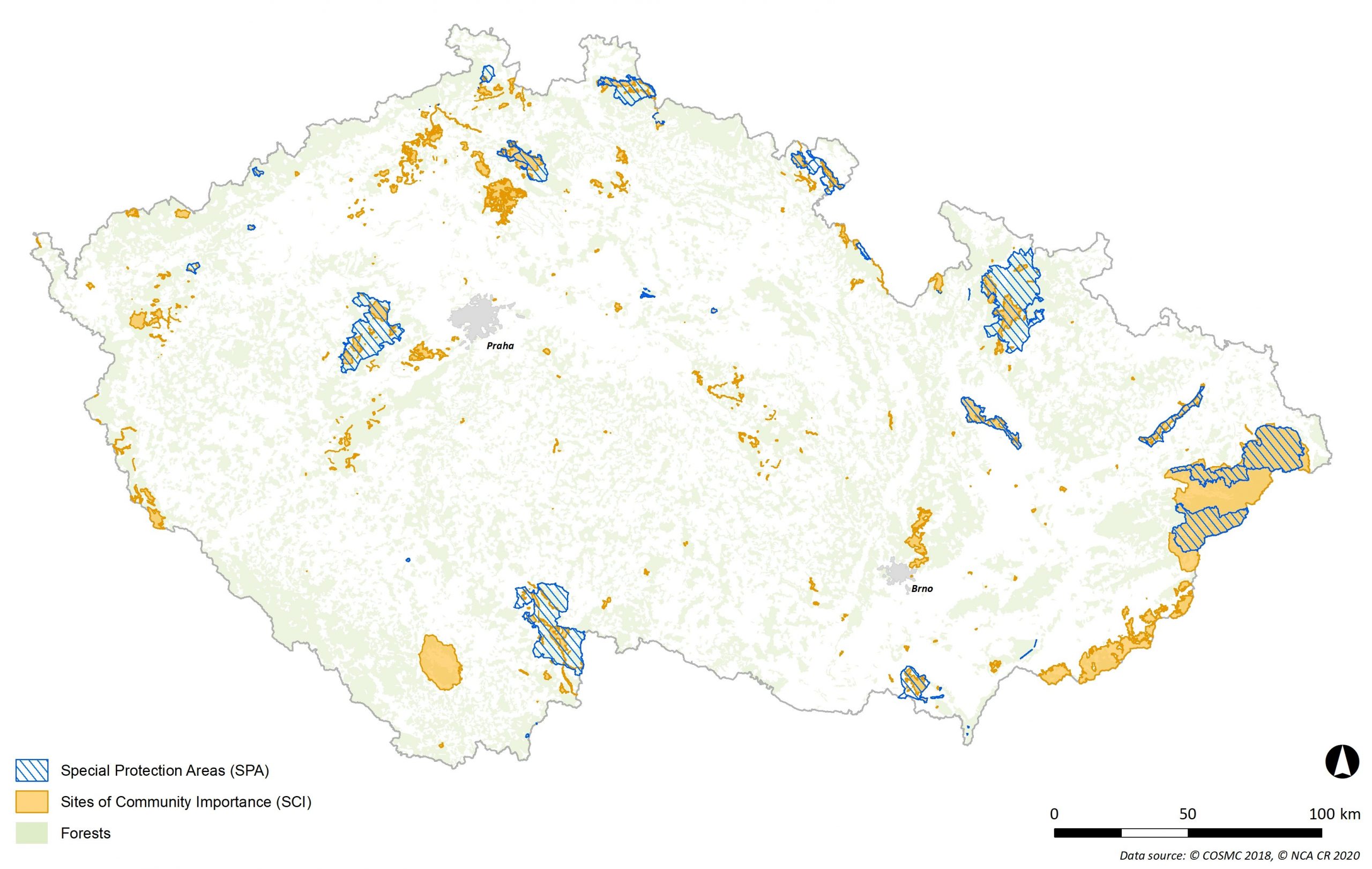 Natura 2000 sites in the Czech Republic administrated by NCA

Pursuant to Article 17 of the Habitats Directive and Article 12 of the Birds Directive, data on the conservation status of species and habitats of Community importance in the Czech Republic, including their trends, influencing pressures, threat factors and other useful information are sent to the European Commission in the form of National report on European species and habitats every six years. It contains the results of extensive data collection at the national level. The Member States´ reports contribute to the creation of one of the most complete data sources on species diversity on a European scale.

History of the Natura 2000 network designation

The selection of Natura 2000 sites is made on the basis of scientific data, e.g. population abundance of plant and animal species, area size and status of the habitat. Sites may be declared on land owned by the state or a private entity, within existing protected areas or in areas not yet protected – the primary guideline is therefore exclusively the expert criteria in accordance with Annex III to the Habitats Directive and, in the case of bird areas, the expert ornithological criteria for selecting important EU bird areas in the revised IBA (Important Bird Areas IBA).

In 2000–2004, mapping of individual species and habitats was carried out. More than 750 professional and volunteer researchers took part in obtaining unique data on the status of the Czech nature. Based on the collected data, an expert proposal of sites of community importance was compiled which was then discussed by the Ministry of the Environment in an inter-ministerial comment procedure. The national SCIs list has been supplemented several times since its first adoption.

The expert proposal for special protected areas (SPAs) was compiled on the basis of the collected up-to-date data on the abundance and distribution of the relevant bird species. This process began in 2000 and resulted in a proposal of 41 SPAs submitted to the Ministry of the Environment in October 2002. During 2003, the second phase of creating the SPAs system, i.e. preparing documents for their designation by a Government decree, was launched (unlike SCIs, each SPA has its own decree).

The Priority Action Framework for the period 2021–2027 was approved in September 2020. This strategic multi-annual instrument provides an overview of all the measures necessary to ensure the implementation of the Natura 2000 network in the given country. At the same time, it defines financial demands for the implementation of selected measures of European protected areas management.