is one of the oldest forest management methods used in the temperate climate zone all over the world. Grazing forests are basically a combination of a pasture and free-growing, often large and robust trees. It offers a suitable environment for species bound not only to open habitats, such as lawns, meadows or steppes, but also to the trees and forest themselves. 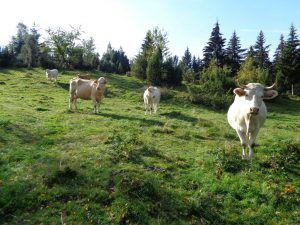 Permitted grazing of cattle in the Beskydy SCI. Photo by Dana Morcinková

In the Czech lands, forest grazing was common from the beginning of agriculture till about the second half of the 18th century. The issue of the Theresian Patents (1754, 1756) limited those forest activities which could lead to a reduction in yield and to degradation of the production potential of the forests. These activities included forest grazing, too.

The ban was not always fully respected and forest grazing had been used in a limited form until the introduction of modern forestry at the turn of the 18th and 19th centuries, when systematic and intensive forest management planning leading to the appearance of the current commercial forests began.

For example, pigs grazed in the forests all year round, feeding on acorns and beechnuts. Livestock grazed in the forests periodically or suddenly – namely both cattle and sheep or goats, or their combination, depending on the character of the stand and the locality in general. Less often, forests were used to graze horses.

The importance of grazing forests

Grazing forests form a landscape mosaic of alternating shady and sunlit areas. In the past, they provided both shelter and food for grazing cattle, as well as wood that could be used or sold directly. Trees in grazing forests were often pruned to get so-called pollards. This method of obtaining wood, also called pollarding, not only provided a long-term renewable source of firewood, but also allowed the trees to produce offshoots from the left high stumps without the present cattle causing any browsing damage.

Open stands with larger tree spacings offer sufficient space for the vegetation of both meadow and forest communities and for invertebrate species associated with them.

Forest grazing is of no importance from the production point of view in the current forest management system. However, the tendency to revive this traditional way of farming can be observed as part of agroforestry systems and especially as a nature conservancy tool.

The present and future of forest grazing

Today, introduction of forest grazing is mainly directed to places where this way of grazing was done in the past and where the structure of the stand is still open or where there was (see Methodology) management of species-rich (light) forests until recently. The historical development of the place, inter alia, is always considered.

From the nature conservancy point of view, large grazers, which include the European bison or primitive horse breeds, are used predominantly. Grazing of domestic animals (especially cattle, horses, sheep, goats, etc.) takes place on selected areas and only in some periods. Besides open oak groves, hornbeam-oak groves or maple forests with pollard beeches, forest grazing is used, for example, to restore forest-steppe habitats and rocky pine groves with an admixture of oak.

In today’s conditions, legislation still limits the implementation of forest grazing, and so it applies almost exclusively in protected areas (in protection forests or forests of special purpose) and only on the basis of an exception from the Forest Act (Act No. 289/1995) which must be requested by the owner from the relevant forest administration body.

The One Nature project aims at mediating the introduction of forest grazing in selected localities and monitoring and evaluating its impact on the given target features. The results of observing the impact of forest grazing on these areas can then be the basis for possible discussions on changes in legislation that currently limit forest grazing.